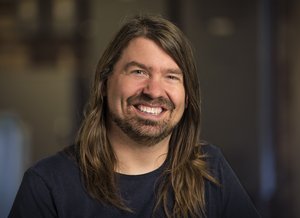 Eric is a multi-headed hydra of creativity, having released 10 albums and toured the world as the drummer for Ultimate Fakebook, The Dead Girls, and Truck Stop Love. He founded the movie-review site Scene-Stealers.com, is a contributor to RottenTomatoes.com, has reviewed movies for Kansas Public Radio, KCTV5, KSNT, and KTKA, and is the current film critic for the Lawrence Journal-World. He's an award-winning business communicator and social media community manager, currently kicking ass for clients at Callahan Creek, a marketing agency based in Lawrence. Eric is currently the social media communications chair for American Advertising Federation – Kansas City, and is the vice president of the KC Film Critics Circle. Perhaps he is best known as the 2013 World Air Guitar Champion, and a tireless ambassador for the sport of competitive air guitar -- and its dream of achieving world peace.